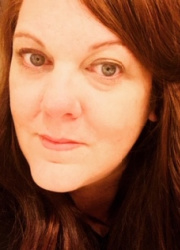 Natasha Jones often refers to herself as The Reluctant Homeschooler. A native of Southern California, she spent her 20s pursuing a career coaching college softball before God found her on a beach in Corpus Christi, TX. Not long after, she met her husband Keith, a Florida native who relocated to Little Rock, AR, for his job with Dillard’s. The story of their meeting and eventual marriage is a true God story (ask her, she loves to share it).

Being a bit older when they married, they waited only a year before starting a family & were quickly blessed with their one & only son. The plan to have two children (both boys) was quickly replaced with God’s plan to trust Him with their family size. They had six girls over the next nine years. Yes, you read that right – six girls. As their oldest grew closer to school-age, God made it clear that homeschooling was the only path for the family (something she had sworn she would never do).

Over the past 12+years of homeschooling, Natasha has realized that although it was not her first choice, it has clearly been the very best choice for their family. God just always seems to know better than we do.

She has written for various blog sites, directed a classical homeschool community, coached a neighborhood swim team, helped with the local homeschool sports organization, served in various ministries at her church and in her community while trying to keep her eyes focused on God in this crazy hard journey.

Natasha started homeschooling when her oldest started kindergarten. This will be her 12th year – the first where she homeschools all seven children.  Her youngest will be starting kindergarten this fall.

She has taught English & Writing in a larger community setting as well as history and science for a few families. Her style has always been rather eclectic but for the past six years, she has been more classically focused while she directs a larger homeschool community. Her oldest has persevered through dyslexia, dysgraphia, and some other learning challenges, which have given her a broader view of education and broken down that idol of education that used to live in her heart.

As mentioned above, Natasha spent a lot of time playing softball. She attended the University of Oregon on a softball scholarship but finished her BA in history at UNLV after her playing career was over.

She has worked at a substitute teacher/coach at Bishop Gorman High School in Las Vegas, Assistant Softball coach at Miami (Ohio)University, and was the Head Softball Coach & part-time instructor in the Kinesiology department at Texas A & M Corpus Christi.  She taught English, Geography, Theology, Speech & coached softball at Lutheran High School in Arkansas before retiring to be a mom.

I have had the honor of working with Lisa Nehring over the course of many years, both as a colleague and as an instructor for my middle school child.  She is well versed in the teaching of literature, composition, and writing to a variety of ages. Lisa clearly states objectives and offers realistic goals to her students.  As a parent and home educator, she offered suggestions and guidance that were attainable and gave me the confidence to guide my child towards success. Lisa has years of experience and insight into a variety of educational strategies and programs.  As a fellow educator and homeschooling parent, her expertise and encouragement are top-notch.  We have had multiple opportunities to collaborate and for me (and my child) to benefit from her wisdom. Any student or parent who has the opportunity to work with Lisa will benefit and be equipped to move forward in their educational journey.

Homeschooling parent of many and fellow educator