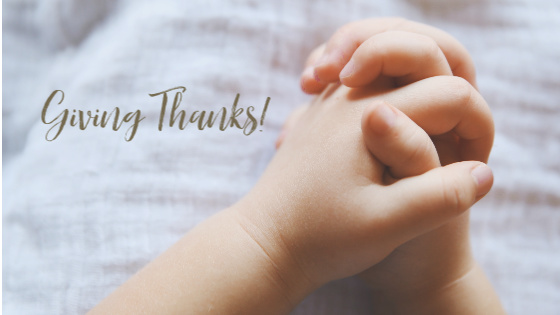 Thanksgiving is hardly a time to think of battles. We were at Gettysburg recently. It was sobering. The wheat field, the hospital, the pillars from the states erected over acres of war-torn land. It was amazing and quieting. We attended a luncheon with our State Senator who mentioned that President Lincoln declared a day of National Thanksgiving after the battle at Gettysburg.

A Day of Thanksgiving after a horrible 3-day butcher-fest.

And the pilgrims- think what you may- lost 45 of the original 102 souls who landed in Plymouth, Massachusetts. They were people who were willing to suffer and die for the hope of freedom and the right to religious liberty. Those that survived celebrated with a feast: a day of thanksgiving after a year of profound suffering, death, and loss.

Maybe you feel like you’ve just come through a battle of sorts: a battle for your health, a battle for a child struggling with addiction, a battle for your soul or the soul of someone you love. What I know for sure and for certain is that this life is chock-full of battles, hardship, and disappointments. And holidays can be like pouring lemon juice on a paper cut!

But I also know that regardless of the battles you’ve fighting or just won or recently lost, there is much to be grateful for. We live in America. We are the fortunate 5% of the world’s population that lives in a place of relative freedom, choices, prosperity, and opportunity.

In spite of the battles being fought, lost and won, we have much to be grateful for.

An Attitude of Gratitude

My daughter and I went to see A Beautiful Day in the Neighborhood when it came out. Mr. Rogers was beloved by many precisely because he continuously found thanksgiving amidst the battle. I certainly didn’t expect to cry throughout, but I wasn’t the only one as you could hear others in the theater muffling tears, sniffling and blowing their noses.

At the end of the movie, Mr. Rogers leans in to whisper to a dying man, a man whose life has been exemplified by loss, addiction, and desertion of the people he was charged to protect. He is asked later, what was it that he whispered. He has asked the man to pray for him because someone so close to death would be close to God. It is a beautiful re-frame. Instead of pitying the man, he sees that death brings clarity and refined purpose. This woeful sinner repented, asked forgiveness in a clear and profound manner and used his last days to redeem and bring healing. Mr. Rogers is grateful for this man’s life-all of it- the pain, suffering, redemption, and healing. He finds thanksgiving amidst the battle.

Holidays can be hard. My prayer for you is that you see all that you have to be thankful for and that despite the current or recently fought battle, you will feel God’s good presence and experience joy!

May it be your will, Lord, our God and the God of our ancestors, that You lead us toward peace, guide our footsteps toward peace, and make us reach our desired destination for life, gladness and peace.

May You rescue us from the hand of every foe, ambush along the way, and from all manner of punishments that assemble to come to earth.

May You send blessing in our handiwork, and grant us grace, kindness and mercy in Your eyes and in the eyes of all who see us.